Nigeria World - All about Nigeria Nation Now, Past

A man operating with a fake name nabbed for armed robbery 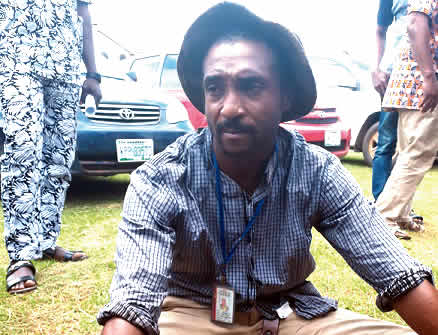 The Zone 5 Police Headquarters in Benin, Edo State, has arrested a 35-year-old man, Stanley Ezeobi, for alleged armed robbery while parading himself as a soldier.

Using a pseudo name, Lukman Adelabu, the father of five was alleged to have snatched an unregistered Toyota Picnic bus from its owner in the Benin metropolis.

It was learnt that Ezeobi, who claimed to be a graduate of Public Administration at the Federal Polytechnic, Oko, in Anambra State, was nabbed by operatives of the anti-vice unit of the zonal police headquarters on August 1.

The Assistant Inspector-General of Police, Mr. Rasheed Akintunde, who paraded him along with other suspected car snatchers on Friday, said that Ezeobi was apprehended while attempting to sell the vehicle.

Akintunde noted that Ezeobi alleged to be attached to one NATRAC Engineering Regiment, a claim which he said turned out to be false.

He also said that the fake soldier belonged to a criminal gang and was helping the police with their investigation.

The AIG explained, “He (Ezeobi) is an armed robber, but claimed to be a soldier. Whenever he brandished his ID card as a serving soldier, members of the public would think that he is a genuine soldier.

“But luck was against him because he had been a wanted criminal. He stole a Toyota RAV 4 SUV and while delivering the vehicle at a car stand for sale, our men nabbed him.

“He brought out a warrant card that he was a serving soldier at NATRAC Engineering Regiment in Kontagora (Niger State). So, we arrested him.

“In the course of the investigations, we wrote to the military regiment to confirm the card and the names and the reply we got was that he was a fake soldier. Further investigations led him to open up on his criminal activities.”

But the suspect told Southern City News that he only used the Army uniform to evade security checkpoints while conveying his goods from Benin Republic.

Ezeobi, who claimed to be the owner of the Toyota Picnic vehicle, also denied being an armed robber.

What's your opinion about this news/article/post?
Make it in the comment below and also see what poeple are saying!

Be the First to Know. Get Our Posts in Your E-mail

Posts Recommended for You

Get Our Posts in Your E-mail

700 Nigerians to be repatriated by United States next week

I was appointed a versity lecturer as an undergraduate – Prof Wande Abimbola
August 14, 2018

The Lucrative Export Business of Snail, where a Piece sells for $4
2 Comment(s)

This animated monster is teaching children in Nigeria — and around the world — about coronavirus
May 1, 2020

Other Posts about Nigeria

Back to
the top
We use cookies to ensure that we give you the best experience on our website. If you continue to use this site we will assume that you are happy with it.OkNoPrivacy policy
Revoke cookies